How bad is Vodafone cable at the moment?

For the last few months (at least since a discussion on Geekzone was created around April 2015, but a couple of months before that) Vodafone customers on cable (the old TelstraClear network) have been trying really hard to keep calm.

At some point, after a few complaints Vodafone decided to put some work into the network and sent out a letter to customers promising things would be better by end of September.

Once the fastest thing around, with speeds of up to 130 Mbps before fibre was even a dream around the country, the Vodafone cable network (in Wellington, Kapiti and Christchurch) started showing signs of ageing. Things started going downhill with the launch of unlimited plans around end of 2014. People moved to unlimited plans with 100 and 130 Mbps options and soon things were really bad, from 7pm through midnight.

And that was even before Netflix opened its doors in New Zealand and the other ISPs started seeing similar performance problems. But it seems most ISPs were not affected or recovered quickly.

Here is one of my speedtest results: 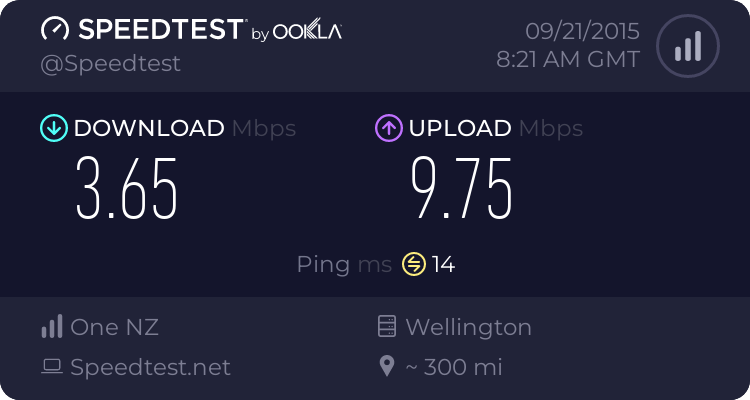 This is on a 130 Mbps connection, over a wired connection, with a gigabit capable router, to Vodafone's own servers. This service would usually show 130 Mbps at any time of the day but now most of the time someone is at home (in the evenings), when we really want to use the service… it's unusable.

This is the performance for New Zealand ISPs according to the Truenet report August 2015. See the red line? That's the drop in speed for Vodafone cable, averaged during the month:

And the advertised speed vs actual:

The letter sent to customers back in May say work is being done and completion is expected by September. I understand this work involves changes in the core network infrastructure, changes to hardware in nodes, enable more channels, software updates.

Vodafone staff are doing a great job of updating the Geekzone discussion as works progresses, as well as keeping an update of work being done in their own Vodafone community site. I really hope this is not going to disappoint us. Fibre is just in front of our driveway now:

Permalink to How bad is Vodafone cable at the moment? | Add a comment | Main Index


I live in New Zealand and my interests include mobile devices, good books, movies and food of course!

I'm the Geekzone admin. On Geekzone we publish news, reviews and articles on technology topics. The site also has some busy forums. Also worth visiting is TravelTalk NZ, a community for travelers!

Subscribe now to my blog RSS feed or the Geekzone RSS feed.

A couple of blog posts you should read:


Other recent posts in my blog